Apple just released the source code for Swift. Naturally people want to get their foot into the door or get the “contributor” status of a high profile project like this.

The easiest way of doing this is to go for the low hanging fruit that is fixing typos in the comments, instructions and other information like that. Loads of people are doing it right now.

It sounded pretty fun, to be listed as a contributor, but I wasn’t about to sift through millions of lines of text to find some spelling error.

The tl;dr; of what I did was to run a spell-checker on the project, found some obvious ones, fixed them and submitted a pull request.

The long version is not much longer actually, so here’s the script I ran:

The * **/* makes it recursive. The aspell is the actual spell check program, it is sorted with sort and then it removes/merges/counts the uniques with uniq -c. 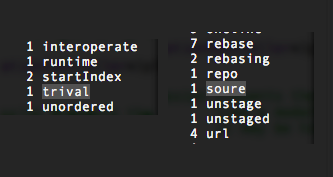 Since it plain looks at all files, there’s a lot of false positives due to the code and programming specific keywords that I had to look past.

It didn’t take long until I found some small ones and two pull requests later and here I am on the contributors list for Swift.