At one point in time my “Downloads” folder had hundreds, if not thousands, of files. It probably took gigabytes in space and was the dump spot for everything together with the desktop. Not the end of the world, but it could be improved.

The gist of it is that I automatically move files that have been resting there for more than a week. I move them to a folder named “Needing review”. You might think, what’s the difference and why can’t I just do that myself? The difference is that this folder will get a slow but steady drip of files into it, which makes it managable.

Once every other day, usually less, I get a notification that a file needs reviewing. Most of the time I can see that it should just be deleted and I do that. Otherwise I will take my time to put it into my organised part of the computer.

I’ve had this system in place for well over 6 months now and since then I’ve not had more than a dozen files in this folder, not had crap files linger for ages and I’ve not accidentally deleted some file while “mass deleting” the previously ginormous “Downloads” folder.

The configuration is trivial. 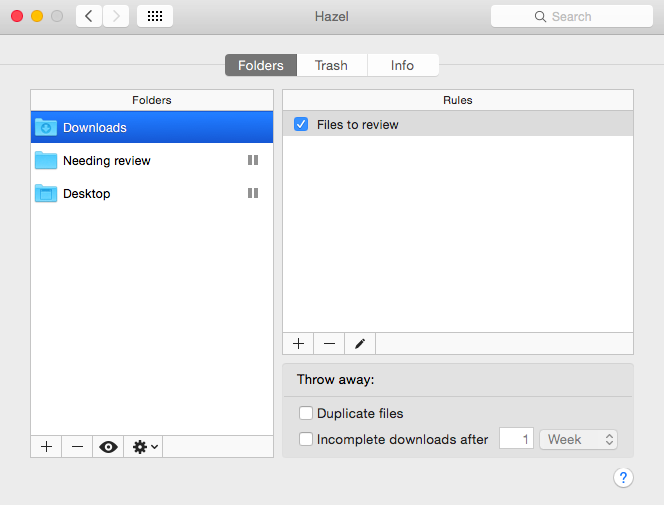 The other two configurations are experimental, one of them shows notifications that stuff are in the “needing review” and the other clears the files from the desktop once per day. I don’t really use either of them.