I like to track stuff, I rarely actually use for something really productive, but sometimes I look at the data and have some fun with it.

For the last two years I’ve tracked my own location. Actually I only track my laptops location, but it is almost always with me so it works.

I use OXSs built in CoreLocation coupled with a cron job. I say I, but actually I use this program which I downloaded and compiled a long time ago.

Running it, it spits out this:

Easy enough to parse. Each hour, with cron, I run the following command.

On the server I have a simple MySQL and PHP script that stores it, and presents it in a Google map. 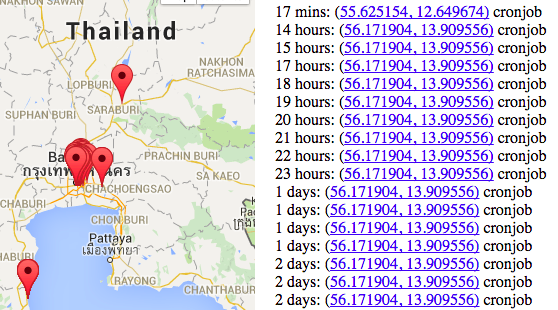 If you look at the URL you can see the title parameter. I had a couple of different ways of sending my locations. I made an iOS application that had only one button which sent my location. I also made an automated version of that one, it required jailbreaking and I did not complete it. 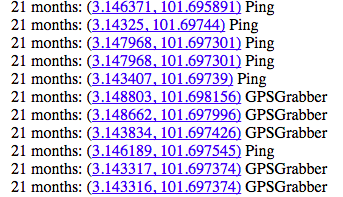 I don’t really use this data, I planned to automate posting images as well but I haven’t done that yet.